Who is Johnny Kicker? A murderer, a prophet, a scapegoat, a puppet, a degenerate, a hero, and counter-revolutionary. Since the invention of music, those that perform it have been accused of sedition. And while rock ’n’ roll has forever aspired to become the anthem of revolution, its momentum has always petered out or collapsed upon itself. That is, until The Witness arrive and start singing about marching in the streets and smashing every window they see. The band gains a following that turns into an army awaiting orders, and when they’re forced to flee the United States, the vacuum left behind is filled with a terrible new ambition. Johnny Kicker is a story of ideology, betrayal, and the manipulation of youth. 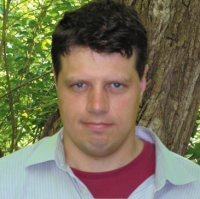 Jeremy Beal is a proud son of each of Ontario’s area codes. Before he took up the pen fulltime he was a locomotive conductor for the Canadian Pacific, and wrote the bulk of his first novel sitting on an engine in railroad sidings. He lives in Georgetown, Ontario with his wife and two children.