"Having never been swallowed by a tiger before, Professor Von Claire wasn't sure what to do about the situation. Strange—whenever one of his colleagues presented him with a dilemma, he could come up with ten solutions on the spot, with plenty of literary allusions, and quotes running gleefully from his pores. It had occurred to him, more than once, that this might be the reason others referred to him as "Tweedmouth," if that was the term. . . ."

The short stories in God`s Autobio, Rolli’s debut collection, are impossible, quite probable, and everything in between. There’s a story about a man with a ridiculously huge coupon; about an elderly woman who befriends a frenzied robotic chimpanzee; an overzealous, if increasingly masochistic butler; plus twenty-three other surreal, sublime, and satirical creations by Canadian writer/poet/artist, Rolli, recipient of the John Kenneth Galbraith Literary Award, and one of the winners of the 2008/2009 Commonwealth Short Story Competition. 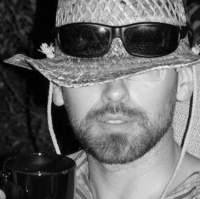 Hailing from Southey, Saskatchewan, Rolli writes—and draws a little—for adults (Rattle, subTerrain, The New Quarterly) and children (Ladybug, Spider, Highlights). He is the author/illustrator of the poetry/art book Plum Stuff, and the gothic novel-in-poems Mavor’s Bones.