As bass player for the ’80s one hit wonder, Rock Viper, Edgar Martin toured the world, had sex with groupies and made thousands of people deaf. But the band broke up years ago and Edgar’s now middle-aged, out of work and desperate for cash. His luck seems about to change however when his old manager calls and offers him a hot new gig. There’s just one thing – the band plays children’s music while dressed as giant forest creatures. Edgar would be the bee. Edgar swallows his pride and takes the gig. After all, it’s just one show. Little does he know he’s just taken the first step on a journey involving bribery, substance abuse, attempted murder and, of course, songs about squirrels. 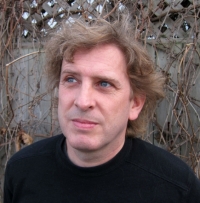 Trevor Strong is a writer, musician, performer, and one third of the music/comedy group, The Arrogant Worms.  His two previous books, Get Stupid! and Very Grimm Fairy Tales are available from his basement. He lives happily in Kingston, Ontario with his wife, kids and mortgage. Trevor is composed mainly of water.

Edgar Gets Going is now available in bookstores and on the e-reader of your choice. Contact Trevor directly at trevstrong@gmail.com.