The Strange September Of Levi Pepperfield

This is the story of Levi Pepperfield, who tries to navigate his future while indulging in the sorrows of his past. With the intersection of parallel worlds—of age and youth, of teacher and student, of man and woman, of real and fictional characters—and the help of a female rabbi, a former student, and a succession of literary giants both real and imagined, Levi begins to find his purpose and gets a second chance at life. Perhaps.

The Strange September of Levi Pepperfield is now available for purchase. 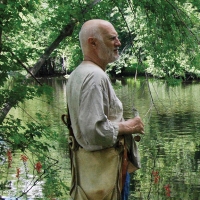 Matthew Manera was born in quite possibly the wrong century, but at least came of age in the best part of the one in which he did appear. He was incorrectly named by his parents, a fault he corrected in his thirty-ninth year. His only passion in life was music, which he pursued both academically, but also, and more importantly, as a singer/songwriter/guitarist until arthritis shouted itself into his fingers, at which point he turned to writing—poetry, essays, short and long fiction. He’s still that guy, living in Victoria, BC.

The Strange September of Levi Pepperfield