Hands Of The Tyrants

An inexperienced CSIS agent, Lucas Young, infiltrates a collective of performance and conceptual artists dubbed “Apollo’s Army.” After assuming the identity of an experimental poet, Lucas joins the group on a cross-country tour of Canada in the summer of 2010. Along the way, this 21st century troupe of court jesters crash a poetry reading in Banff, represent a fictional country in a multi-cultural parade in Calgary, resurrect Louis Riel as a guitar-god in Saskatchewan, heckle debaters at an arts symposium in Winnipeg, and storm a Toronto printing press to publish their manifesto. Hands of the Tyrants is a satirical romp that laughingly offers a noisy raspberry to the absurd machinations of the art world. 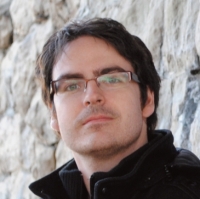 Hailing from Sioux Lookout, Ontario, Micheal Laverty graduated with an MA in Creative Writing from the University of Windsor and completed the School for Writers program at Humber College. His writing has appeared in various journals including The Fiddlehead and The Windsor Review. Hands of the Tyrants is his first novel.

Hands of the Tyrants is now available in bookstores. Contact Micheal directly at mikelaverty@gmail.com.

Hands of the Tyrants