Tennis prodigy Olie Wood was once the toast of professional sports. He was featured on the cover of Sports Illustrated. He gave prime ministers lessons, dated movie stars, and was rumoured to have been intimate with Madonna. (He’ll neither confirm nor deny.) But a bizarre incident at the Australian Open involving a tragically murdered kookaburra, setting in motion a run of bad luck that continues to this day, has reduced him to a broken man desperately clinging to memories of greatness.
Now in his thirties, Olie is nearing the end of what little remains of his tragic career. A dabbler in drugs, he is at times dishevelled and delirious, playing the Futures tennis circuit against athletes half his age in small, no-name towns. When he eventually hits rock bottom, he is forced to face a life of responsibility and maybe even a real job. But Olie has one remaining goal: to qualify for the US Open for one last big payday and one final grasp at fame.
With a protagonist who may be hard to like on the outside but deep down you can’t help but root for, Backspin follows Olie, his cat, and his defrocked-priest pal Gary across North America and Europe on an epic road trip quite unlike any other. 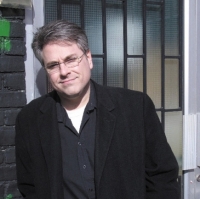 Charles Crosby is an East Coast-based playwright and novelist. His first novel, italics, mine was published in 2005 by Norwood Publishing and was shortlisted for the Margaret and John Savage First Book Award. He lives in Halifax with his wife Tanis, and sons Liam and Patrick.