In this dark and gritty crime novel, the vacant Skyward Fairgrounds loom in the background as regional police officers pursue a stolen car and its unpredictable driver. A dangerous, high-speed chase unfolds. A few miles from the frozen highways, relentless Detective Kyle McVeigh pushes the boundaries to arrest local troublemaker Stan Hill; McVeigh is convinced Hill is responsible for three abductions that occurred at the Skyward Fair. The peculiar life of the pursued unfolds as he taunts and dares his pursuers, while the single-minded McVeigh moves ever closer to taking down his suspect. But when rookie officer Sheila Warfield enters the fray, the facts—and her uncanny premonitions—threaten to drag everyone into frightening and deadly territory.

Skyward is now available in bookstores and online. 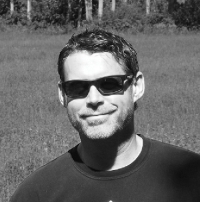 Philip David Alexander is the author of The Next Rainy Day, nominated for a ReLit Award and optioned for feature film, and North of Here, also optioned for screenplay development. In addition, he has written the crime novel Peacefield, which like Skyward bends the crime/police procedural genre. He lives in Burlington, Ontario.