What happens when the narrator is removed from a story? When the author’s life is fictionalized instead, so that creator and creation relate on the same existential ground? Chameleon (Days) is such an experiment in storytelling, exploring an author’s psychotic break as he prepares to write an idea he has apparently stolen, one prompted by the discovery of a secondary character in his walk-in closet. A fictional day-to-day narrative structured around the search for Kashif, a feared and hunted terrorist labeled the Chameleon, Chameleon (Days) bridges its author’s life to the evolution of Kashif’s story creating a fiction “while life happens,” which often manifests itself in interference, inspiration, and the perils of letting your character know who his creator is.

"Serravalle's Chameleon (Days) is a comically thoughtful riff on the intersections of art and reality, life and story." ~ Richard Scrimger, author of The Wolf and Me 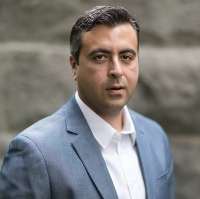 Acclaimed author of Reliving Charley, Dean Serravalle has been twice nominated for the prestigious Journey Prize of Canada and The National Magazine Award, while his short stories have appeared in various journals and magazines. He resides in Niagara Falls, Ontario with his family. Dean's new novel, Chameleon (Days), is now available in bookstores and online.