At its core, Never a Child is the culmination of a young woman’s experiences—both an open dialogue with, and a true reflection of, those individuals who have contributed to her understanding of her feminine identity. Through dealing with anxiety, reclaiming herself after trauma, and coming to terms with spirituality, the poet’s work matures with each page, allowing both the author and the reader to grow together. This outpouring of faith, self-acceptance and strength to overcome conflict never strays from the author’s own journey, yet never loses sight of the fact that her story is but one of many, each requiring its own calibration of vulnerability and strength. 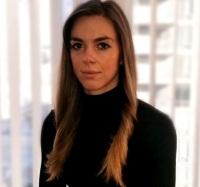 Originally from Albany, New York, M.A. Mahadeo makes her home in Toronto, Ontario where, having immersed herself in the city’s literary scene, she’s had poems appear in such publications as Blood & Bourbon, Anti-Heroin Chic, Man in the Street Magazine, and Rejected Lit. Never a Child is her first collection.

Never a Child is now available for purchase in bookstores and online.