Earl Qume’s poisoned mind has altered his reality and transformed his surroundings into omnipresent threats. After his wife kicks him out and he finds himself on the run from the law, he escapes the concrete confines of Toronto to find refuge in the foothills of the Rocky Mountains. There he joins a group of travelers, led by a peculiar wilderness guide named Wolfgang Yellowbird, who takes them on a journey deep into the winter-scape of a massive and glorious wilderness. As Earl’s mind calms and his body begins to heal, astronomical forces pulverize the outside world. And with humanity being wiped out by the billions, Earl finds friendship, love and salvation. Sometimes it takes something drastic to reset the course. 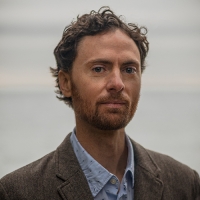 Born in Malawi, Luke Inglis spent his childhood skipping between British Columbia and Africa. When not lost in the deep woods, he can be found at his day job as a professional book slinger. He lives on the Sunshine Coast in BC with his dog Floyd. Something Drastic is his first novel.

Something Drastic is now available for purchase in bookstores and online.