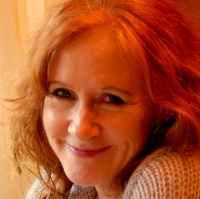 Author of The Walking Tanteek, Jane Woods spent a decade working in Canadian regional theatre before settling in Montreal to work as a voice actress. Later, she began translating and adapting French-language films and television series to be dubbed into English. She lives in Toronto, where she continues to work as a translator. Running Downhill Like Water is her second novel.

Running Downhill Like Water is now available for purchase in bookstores and online.